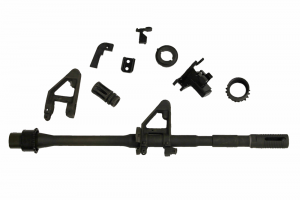 The excavation at an ancient Roman fort in Germany in the 1940s shows how far back coating metals with phosphates goes. Several iron items were found in remarkably good condition, with their surfaces converted into a blue iron phosphate coating that resisted corrosion remarkably well over the millennia. The widespread use of phosphate coatings in modern society did not begin until the mid-19th century, however, with the discovery that hot iron treated with coal dust and potassium phosphate resisted corrosion. From 1869, a variety of methods for coating metals with phosphates to protect iron and steel from corrosion were patented, and the process became increasingly widespread. Zinc and manganese phosphate coatings – the two most common types of phosphate coatings – are now widely used for a number of industrial purposes.

What is Phosphate Coating?

Today, zinc and manganese phosphate coatings serve as pre-treatments for metal prior to further coating or painting, helping paints adhere better to metal surfaces while additionally protecting electrically conductive metals for even better corrosion control. It can also be used as a final finish, but most frequently used as a pre-treatment. As per their original use, these phosphate coatings protect against corrosion, but also reduce friction in sliding components.

Found only in combination with iron and other minerals, manganese is an exceptionally rigid, brittle and grayish-white metal. A common element occurring throughout the Earth’s crust, manganese is also used in steel production and glassmaking.

Often manganese phosphate coatings are applied to bushings, bearings, fasteners, and other commonly used industrial components. Tending to be dark gray or black in color, these manganese coatings are particularly useful for systems like motor vehicle transmissions with sliding features, as well as with automotive clutch and brake assemblies, engine parts, and coil springs.

The Other Phosphate Coating

When compared to other coatings, manganese phosphate offers properties that improve the reliability and overall performance of metal components.

There are numerous applications for manganese phosphate coatings, which are commonly used for components in engines, magnetic cores in electric motors, transmission systems and mechanical gears. The coating helps increase the service life for these various systems by reducing wear from friction and protecting against corrosion. Because of these properties, manganese coatings are also used for fasteners such as nuts, bolts, screws, and washers.

Silvex offers a large variety of advanced finishes processed to NADCAP, ISO 9001:2015, and AS 9100 and other standards for industries including defense, aerospace, hospitality, telecommunications, water purification, power generation, and much more. If you have questions about our manganese phosphate coating, please contact us at Silvex today!