The alternative energies industry is one of the largest emerging customers in the surface finishing market. Hydrogen fuel cell technology is quickly becoming widely adopted in place of combustion engines for its efficiency and environmental impact. Natural gas lines, power grid management, and solar and wind farms require small processing components and chipsets. All these parts have various plating requirements for insulation and protection. The precious metals used in these processes are some of the scarcest and in-demand elements currently used in manufacturing, with advancing technology only expected to add greater need.

Platinum and silver plating are utilized in alternative energy for their corrosion resistance, heat resistance, and high durability. While commonly seen in processors and computer components, a new range of needs has also surfaced for alternative energy plating. Flow field plates for fuel cells, titanium fibers, and various electrodes all largely use platinum and silver plating for their exceptional conductive properties. Platinum specifically is preferred in situations where the components will be subject to high heat environments

Silver plating can be deposited onto aluminum, brass, bronze, copper, steel, and stainless-steel alloys. The finish can be matte, semi-bright, or bright. Silver can be plated as thin as 1 micron, with most applications requiring thicknesses ranging from 10 to 40 microns depending on the application. Thinner plating is desired for its solderability, while thicker silver application provides high levels of wear resistance. The alternative energy industry utilizes silver plating for electrical components due to its exceptional conductivity and heat resistance. Silvex routinely plates industrial circuit breaker components for various television and radio antenna producers, transmission lines, and radio frequency systems.

The platinum demand is nearly 8 million ounces annually, with more than half being used to coat catalytic converters for emission handling. Platinum plating creates parts with high levels of durability, as well as corrosion and heat resistance. Silvex can plate platinum on parts up to 12” in length. This can be done on brass, castings, copper, invar, Kovar, steel, stainless steel, and titanium. The finish commonly ranges from .05 to 5 microns depending on the application, while the color will range from tin white to matte gray, depending on the material, process, and plating thickness. Many emerging alternative energy sources rely on platinum-plated components to function. Silvex works with many leading companies in hydrogen fuel cell technology to plate platinum catalysts, flow fields, and oxygen anode terminals. 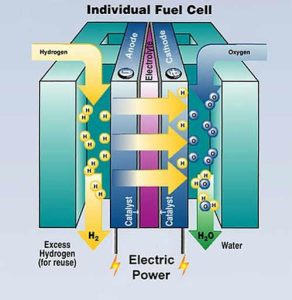 Hydrogen fuel cells are quickly becoming the preferred green energy battery and are already fueling many electric vehicles. They provide more than double the efficiency of an average combustion engine, with an average rating of 50%-60%, with zero greenhouse gas emissions. Platinum-plated titanium screens form the anode of the hydrogen fuel cell. This platinum becomes the catalyst to split the hydrogen into electrons and positively charged hydrogen ions. This gas is then passed through a polymer electrolyte membrane allowing the electrons to be captured and used as an electrical current while allowing the protons to pass through the membrane. The hydrogen byproduct is then combined with oxygen and released as water.

Contact our experienced team at Silvex, Inc. to learn more about our finishing capabilities for the alternative energy industry.